While Don Wright’s introduction to broadcasting did not happen until he was in his late thirties, the next sixty years saw him achieve star status in many fields of radio and television.

Don Wright was born in Strathroy, Ontario, on September 6th 1908. His musical influences began with his family. Ernie, his father, owned a musical instrument store and founded and headed a piano manufacturing firm. His mother was an accomplished pianist and singer, and Donald reportedly began showing signs of singing ability at the age of two. He sang with the church choir, studied the cello, and later learned to play the trumpet.  At the University of Western Ontario he got his Classics BA in 1933, while finding time to shine in athletics, particularly the hurdles and the broad jump, and in music, where he played with the orchestra at the university as well as leading a COTC (Canadian Officers’ Training Corps) marching band as a Second Lieutenant. On graduating, Don went to the Ontario College of Education, and during the summer he and his brothers played gigs around Ontario as the Wright Brothers Orchestra, with Don as leader.

On graduating from OCE, Don taught classics, music and history at Sir Adam Beck Collegiate in London, Ontario, and in 1940 was appointed Director of Music for all London schools. With World War II under way, he tried to enlist, but instead was asked to return to Western with the rank of Captain and organize musical units and troop shows to entertain the services. He wrote music for and conducted three different troop shows, as well as organizing and training all the Air Cadet Bands in London’s secondary schools, where he held the rank of Flying Officer in the RCAF.

In 1946, with the war now over, London Free Press and CFPL Radio owner W.J. Blackburn persuaded Don Wright to leave the Board of Education and move over to become Manager of CFPL.  He stayed for ten years. Among his first acts in 1946 were to hire future CBC superstar Max Ferguson as an announcer, and give Ward Cornell a job as a sports reporter. Don also gave local boy Tommy Hunter one of his first radio broadcasts.  In 1949 he formed the 14-voice Don Wright Chorus, which was first introduced on-air by Guy Lombardo, and broadcast nationally for ten years on U.S. radio as well as in Canada.

In 1955, Don’s daughter Priscilla Wright had a hit recording of The Man In a Raincoat, backed by the Don Wright Septet, and she sang the song on the Ed Sullivan Show on July 23rd of that year. It was in the fifties that Don began what was to be an exceptionally successful new career as a writer of jingles for radio and later television commercials, which earned him the nickname of “The Jingle King”.  He was also much in demand by the CBC, as musical director for such series as the Denny Vaughan Show, The Wayne and Shuster Show and Cliff Mackay’s Holiday Ranch, as well as composer of scores for several CBC documentaries, including Pierre Berton’s “Trail of ‘98”, and “The Opening of the Seaway”. He also broadcast frequently with his own Don Wright Singers, a group he formed in 1957. 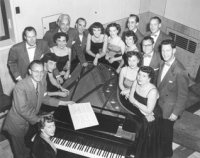 Though forced to slow down by a heart attack in 1961, Don continued to make his mark on Canada’s music scene.  He remained active in many areas of music education, and his Don Wright Charitable Foundation, founded in 1966, provided 34 music scholarships in thirteen Canadian universities.  He gave $3,000,000 to his alma mater, the University of Western Ontario, who named the Don Wright Music Education Wing in his honour, and $1,000,000 to the University of Victoria, BC, as well as endowing many other scholarships, particularly to churches and hospitals. While his musical activities earned him substantial fees and royalties, he was also heir to the estate of his late wife, Lillian Meighen, daughter of the Right Hon. Arthur Meighen, and Don was determined to see this money put to good use.

In 1967 he was commissioned to produce a choral work titled Proudly We Praise, which was performed on Canada Day and earned him an audience with the Queen, and the Centennial medal.   In his ‘retirement’, Don wrote a 20-volme thesaurus entitled Fifty Years of Music with Don Wright, and donated copies to educational institutions across the country.  Other books by Don included The Collegiate Choir, Youthful Voices, Fun To Read Music and Pre-teen Song Settings. He was also a frequent guest speaker at institutions across Canada and the United States.

At his eightieth birthday celebrations in Toronto in September 1988, his daughter Priscilla reprised her hit song The Man in a Raincoat, with Don accompanying her on his trumpet.

On October 17th 2001, Governor-General Adrienne Clarkson invested Don Wright as a Member of the Order of Canada.

The Globe and Mail
University of Western Ontario